Do you know what camouflage is? Camouflage is the use of any combination of materials, coloration, or illumination for concealment, either by making animals or objects hard to see (crypsis), or by disguising them as something else (mimesis). Examples include the leopard’s spotted coat, the battledress of a modern soldier, and the leaf-mimic katydid‘s wings. A third approach, motion dazzle, confuses the observer with a conspicuous pattern, making the object visible but momentarily harder to locate. The majority of camouflage methods aim for crypsis, often through a general resemblance to the background, high contrast disruptive coloration, eliminating shadow, and countershading. In the open ocean, where there is no background, the principal methods of camouflage are transparency, silvering, and countershading, while the ability to produce light is among other things used for counter-illumination on the undersides of cephalopods such as squid. Some animals, such as chameleons and octopuses, are capable of actively changing their skin pattern and colours, whether for camouflage or for signalling.

Some animals camouflage in the ocean like the rockfish or flounders. But in my opinion, this one would be the best. It is called the “leaf fish”. 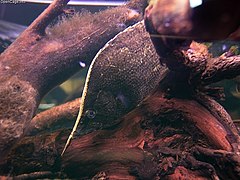 Leaffishes are small freshwater fishes of the Polycentridae family, from South America.

All of these fishes are highly specialized ambush predators that resemble leaves, down to the point that their swimming style resembles a drifting leaf (thus the common name leaf fish, which is shared with old world fishes of family Nandidae with a similar lifestyle); when a prey animal – such as an aquatic insect or smaller fish – comes within range, the fish attacks, swallowing the prey potentially within a quarter of a second. To aid in this lifestyle, all members of the family have large heads, cryptic colors and very large protractile mouths capable of taking prey items nearly as large as they are. These intriguing behaviors have given the family a niche in the aquarium hobby; however, none of these species are easy to maintain in aquariums, requiring very clean, soft, acidic water and copious amounts of live foods.