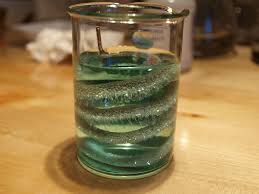 As said on my post (it finally came 2) the silver nitrate is only 10 grams and it’s about $20. 10 grams is a little amount and it is very expensive, so I hope I don’t make any mistakes. The classic silver tree demonstration! Very simple to set up and perform, it’s great to introduce kids to the world of chemistry.

As you could see the reaction has started.

The more silver nitrate you add, the quicker the reaction starts.

Silver Crystals are covering the copper. It looks very pretty.

Prettiest experiment I ever performed.

This experiment is very easy to setup and very fun for kids.

Now I’m going to filter the silver metal out and see what comes out.

I got the silver metal. I put it in a bottle to preserve it. 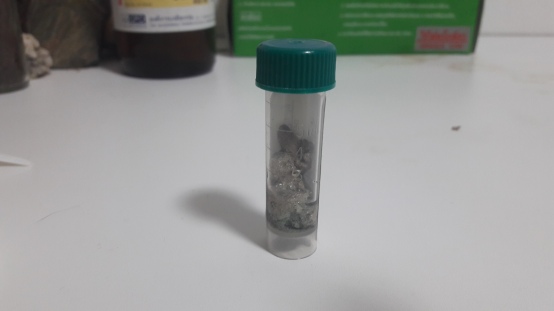 The Wood-nettle: a Plant that could Sting like a Bee

This will be a short post. If you’re interested please continue reading. There are lots of poisonous plants out there. But not as painful as this one:

Laportea canadensis, commonly called Canada nettle or wood-nettle, is an annual or perennial herbaceous plant of the nettle family Urticaceae, native to eastern and central North America. It is found growing in open woods with moist rich soils and along streams and in drainages.

Laportea canadensis grows from tuberous roots to a height of 30 to 150 centimeters, and can be rhizomatous, growing into small clumps. Plants have both stinging and non stinging hairs on the foliage and the stems. It has whitish green flowers, produced from spring to early fall.

This herbaceous perennial plant is about 2-4′ tall and either branched or unbranched. The stems are light to medium green and abundantly covered with stiff white hairs that have the capacity to sting when they are rubbed against. The lower to middle leaves are alternate, while the upper leaves are opposite. These leaves are up to 6″ long and 4″ across; they are medium to dark green, ovate-cordate to oval-ovate in shape, and coarsely serrated or serrated-crenate. Young leaves are densely hairy and wrinkled in appearance, while older leaves become less hairy and wrinkled with age. Leaf venation is pinnate. The petioles are up to 4″ long and abundantly covered with stinging hairs, like the stems. The leaves may have a few stinging hairs as well, particularly along the central veins of their undersides. Some plants have a tendency to loose many of their stinging hairs as the season progresses. Individual plants are either monoecious (separate male and female flowers on the same plant) or unisexual.

The male flowers occur in branching cymes from the axils of the leaves. These cymes spread outward from the stem and they are about the same length as the petioles of the leaves. Each male flower is greenish white to white and less than 1/8″ (3 mm.) across, consisting of 5 narrow sepals, 5 stamens, and no petals. The female flowers occur in branching cymes toward the apex of the plant. These cymes are erect to spreading and 4″ or more in length. Each female flower is more or less green and about 1/8″ (3 mm.) across, consisting of 4 sepals of unequal size (2 large and 2 small) and an ovary with a long style. The blooming period usually occurs during mid- to late summer. The flowers are wind-pollinated. Each female flower is replaced by a small dry fruit that is curved and ovoid in shape. This plant often forms colonies of variable size.

When the stinging nettles come in contact with the skin, the unlucky individual is dealt a painful burning stinging sensation, sometimes with barbs left in the skin. The skin can turn red and blister, and blisters can last for several days.

Mmm… that should really hurt. Well, thanks a lot for viewing this short post. 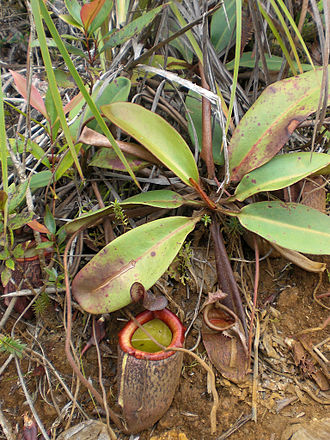 Nepenthes, also known as tropical pitcher plants or monkey cups, is a genus of carnivorous plants in the monotypic family Nepenthaceae. The genus comprises roughly 150 species, and numerous natural and many cultivated hybrids. They are mostly liana-forming plants of the Old World tropics, ranging from South China, Indonesia, Malaysia and the Philippines; westward to Madagascar (two species) and the Seychelles (one); southward to Australia (three) and New Caledonia (one); and northward to India (one) and Sri Lanka (one). The greatest diversity occurs on Borneo, Sumatra, and the Philippines, with many endemic species. Many are plants of hot, humid, lowland areas, but the majority are tropical montane plants, receiving warm days but cool to cold, humid nights year round. A few are considered tropical alpine, with cool days and nights near freezing. The name “monkey cups” refers to the fact that monkeys have been observed drinking rainwater from these plants.

Nepenthes species usually consist of a shallow root system and a prostrate or climbing stem, often several metres long and up to 15 m (49 ft) or more, and usually 1 cm (0.4 in) or less in diameter, although this may be thicker in a few species (e.g. N. bicalcarata). From the stems arise alternate, sword-shaped leaves with entire leaf margins. An extension of the midrib (the tendril), which in some species aids in climbing, protrudes from the tip of the leaf; at the end of the tendril the pitcher forms. The pitcher starts as a small bud and gradually expands to form a globe- or tube-shaped trap.

Here is the important part.

The trap contains a fluid of the plant’s own production, which may be watery or syrupy, and is used to drown the prey. Research has shown this fluid contains viscoelastic biopolymers that may be crucial to the retention of insects within the traps of many species. The viscoelastic fluid in pitchers is especially effective in the retention of winged insects. The trapping efficiency of this fluid remains high, even when significantly diluted by water, as inevitably happens in wet conditions.

The lower part of the trap contains glands which absorb nutrients from captured prey. Along the upper inside part of the trap is a slick, waxy coating which makes the escape of its prey nearly impossible. Surrounding the entrance to the trap is a structure called the peristome (the “lip”) which is slippery and often quite colorful, attracting prey, but offering an unsure footing. The prey-capture effectiveness of the peristome is further enhanced in moist environments, where condensation may cause a thin water film to form on the surface of the peristome. When wet, the slippery surface of the peristome causes insects to ‘aquaplane’, or slip and fall, into the pitcher. Above the peristome is a lid (the operculum); in many species, this keeps rain from diluting the fluid within the pitcher, the underside of which may contain nectar glands which attract prey.

Prey usually consists of insects, but the largest species (e.g. N. rajah and N. rafflesiana) may occasionally catch small vertebrates, such as rats and lizards. 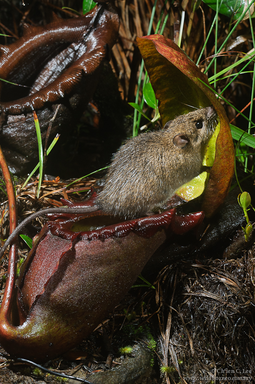 There are even records of cultivated plants trapping small birds. Flowers occur in racemes or more rarely in panicles with male and female flowers on separate plants. They are insect-pollinated, the primary agents being flies (including blow flies, midges, and mosquitoes), moths, wasps, and butterflies. Their smells can range from sweet to musty or fungus-like. Seed is typically produced in a four-sided capsule which may contain 50–500 wind-distributed seeds, consisting of a central embryo and two wings, one on either side.