How to make a Lava Lamp

Things you’ll need: a flask, a beaker, Alka-Seltzer tablets (I used this on the Cold Chemistry experiment), food coloring, vegetable oil, and water. 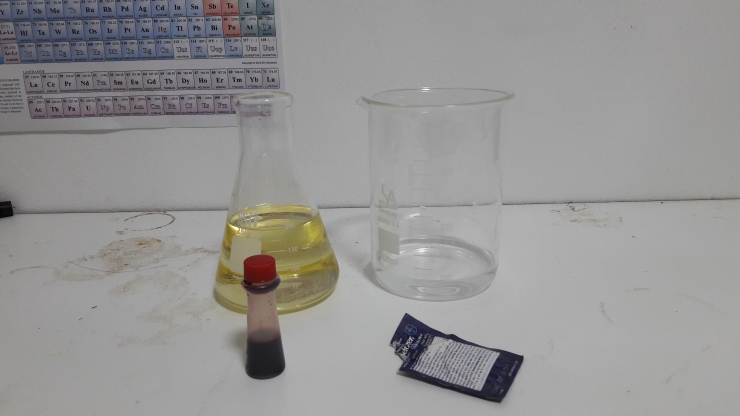 Oil and water have different densities. Oil is a non-polar liquid while water is a polar one. Polarity refers to the way molecules connect with each other – what kinds of molecular bonds they have. Polar molecules only bond with other polar molecules. This is why oil doesn’t mix with water. Real lava lamps use a polar and non-polar liquid just like this one did. However, the densities of liquids are much closer together than oil and water. The denser liquid sinks to the bottom, but the lava lamp light heats it up until it expands and becomes less dense, causing it to rise. As it gets farther from the light, it cools down, sinks, and starts over.

Instead of using a light, in my homemade lava lamp I used Alka-Seltzer, which reacts with the water to produce carbon dioxide gas bubbles. These stick to the water droplets. The water/gas combo is less dense than the oil, so it rises to the top of the flask. At the top, the gas bubbles pop and escape into the air, allowing the dense water to sink back to the bottom again. When enough carbon dioxide gas escaped, the reaction slowed. Add more Alka-Seltzer tablets to keep the reaction going.

Learn more about densities at my The Floating Needle experiment.

3 Replies to “How to make a Lava Lamp”